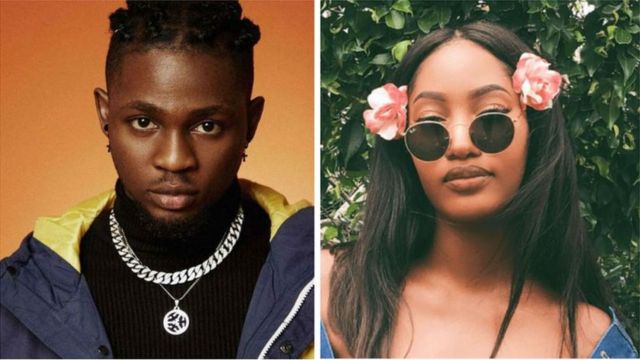 As 2021 is ending, we can arguably say it has been a good vintage for African music.

We’ve taken a look at who’s innovating in terms of style and sound, as well as who is exploring new genres, to come up with our list of who to watch out for:

Commanding attention with the release of her 2019 single Try Me, Tems is a Nigerian singer-songwriter on the rise. Not forgetting her feature this year with WizKid on “Essence” and Justine Beiber. The song is currently on the Top 10 Billboard US Chart on the 10th spot, making it the first Nigerian song to get there.

Renowned for her powerful voice, her music is layered over an infectious sound accentuated with elements of soul, hip-hop, and R&B.

With the release of her “If Orange Was a Place” EP. Tems is building a fan base that stretches beyond Nigeria and the continent.

With charm and attitude, the 19-year-old singer is one of Nigeria’s most promising new voices. Born Oyinkansola Sarah Aderibigbe, she chose the stage name Starr because she knew what she could be. Then she chose the Arabic name, “Ayra,” meaning honorable and respected.

It can be said that her career started in 2019 as she would post videos of herself on social media, singing a mix of songs from other artists and songs she wrote by herself. Her videos got thousands of views and engagement.

It is possible that Don Jazzy found her through Instagram. He signed her to Mavin records in 2020 and she released her first project, ‘Ayra Starr,’ in January 2021. “Bloody Samaritan” is one of her most streamed watched videos on YouTube. The song is off her studio project called “19 & Dangerous”.

Omah Lay originally born Stanley Omah Didia is a Nigerian songwriter and singer. Omah Lay was born in Port Harcourt on May 19, 1997. He is 23 years of age

Omah Lay caught our attention following the release of his song Bad Influence.

With his enchanting voice and well-defined sound over a combination of Afrobeats, Afrofusion, and soul, the fast-rising artist has positioned himself as one to watch.

He is also leading the pack of new school artists from Nigeria and has worked with American singer and rapper 6lack.

Last year Omah Lay had a worrying few days after he was detained in Uganda for allegedly breaking coronavirus regulations, but a huge social media campaign for his release was testimony to his growing popularity.

Elaine is fast claiming her spot as one of the golden R&B voices from the continent.

In this era when many singers resort to auto-tune, the 21-year-old stays true to her real voice.

She signed to US label Columbia records last August which should see her build on solid foundations.

Elaine captured fans with her authenticity and her 2019 song called You’re the One. This saw her become one of the most streamed artists in South Africa.

Her debut EP Elements was a powerful introduction showcasing her hypnotic voice, filled with memorable lyrics about love and relationships over trap-soul and R&B.

Azawi is a Ugandan multi-talented singer-songwriter. She was inspired to do music and dance years ago after frequently visiting the Ndere Cultural Centre to watch the dance festivals. She, later on, joined Kika Dance Troupe in 2005. After leaving Kika Dance Troupe that is when Azawi started writing for a few artists locally, in Uganda. Azawi has written songs for Lydia Jazmine, Nina Roz, Eddy Kenzo, and more.

Considering the release of her first and latest album “African Music” which is undeniably one of the best albums this year from East Africa. Azawi has been showing signs of a real star.

During her journey as a songwriter, Azawi was discovered by Swangz Avenue and this has put her on a path to stardom. She is currently getting ready 2022 is promising to be a big year for the singer.

KiDi, part of a new generation of Ghanaian artists, had his breakthrough moment when his recording Sugar won album of the year at the 2020 Ghana music awards.

The singer’s youthful Afrobeats and Highlife sound make his music accessible to people beyond Ghana’s borders.

In 2020, KiDi’s song Say Cheese, from his Blue EP, gained the musician international prominence after American singer Teddy Riley collaborated with him on the remix.

The 27-year-old has also collaborated with other West African artists, including Davido and Mr. Eazi.

As an upcoming artist, Zuchu’s growth has been phenomenal.

The singer performs in Swahili and English and is fond of experimenting with the Tanzanian genre Bongo Flava. This year the singer released “Sugar” off her debut EP “I Am Zuchu” which got over 50M YouTube views and she is also signed to Diamond Platnumz’s record label WCB Wasafi.

According to the BoomPlay streaming app, her EP was the most played album in Tanzania in 2020, and her music videos have gathered millions of views on YouTube.

Sha Sha is a gifted singer with a soulful sound, which she debuted on her 2019 EP Blossom.

The Zimbabwean-born singer’s stirring voice comes on strong over Amapiano sounds, which she opts for and this sets her apart.

With her sweet voice, Soraia Ramos is exploring themes of love and relationships with lyrics in Portuguese and sometimes Creole.

She has given kizomba a refreshing twist, sometimes infusing it with elements of hip-hop and R&B.

The Cape Verdean singer is currently making waves with her single O Nosso Amor jointly released with Calema as well as the remix of her single Bai with Lisandro.

On YouTube, her music videos for both the original version of Bai and the remix have more than 15 million views.

Kabza De Small has made quite an impression since he first started releasing music in 2016.

The DJ and record producer is tagged the King of Amapiano, a genre originating in South Africa. His signature is melodic, energetic, welcoming, and contagious music.

Kabza De Small has become a champion of a sound that crosses over into other African countries and is gaining acceptance across the world.

His influence can be heard in tracks recorded across the continent and that was recognized when he was nominated in MTV Europe’s Best African Act category in 2019.

Gaz Mawete came onto the scene in 2018 with Olingi Nini, an easy, warm, and melodic tune, and he rose to prominence in the world of Francophone music.

The Congolese dancer, who became known at home after taking part in talent contests, has collaborated with music royalty, including Fally Ipupa, who appeared on C’est Raté. Mawete was also featured on Dadju’s album Poison ou Antidote.

Mawete had a launchpad for 2021 after being nominated in the Best African Act category at last year’s MTV Europe Music Awards in 2020.

You can add your favorite African music stars in the comment section below.

Vibe Out Lyrics by Tems